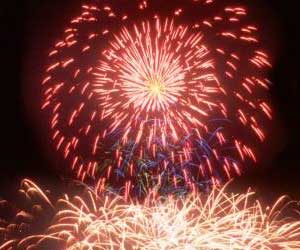 Late July for Santa Anna, during the Village Fair.

Blanes on the Costa Brava is the venue for one of Europe’s most important competitions: the Blanes Trophy Costa Brava International Fireworks Competition, staged by Blanes Town Council.

The event dates back to the century before last: it was first recorded in 1891, when the local writer Josesp Alemany made reference in his personal diary to the festivity. It was in 1970 that the town of Blanes, which was experiencing a socio-economic boom, decided to expand its local festival with a firework show to raise the town’s standing and profile. Ever since then it has been held every year, except during the civil War.