Festival of the Harvestmen’s Revolt 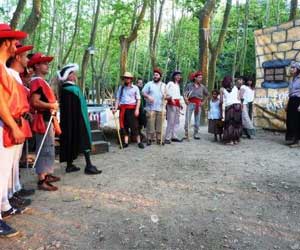 Thanks to the Festival of the Revolt of the Harvestmen, well into the 21st century Santa Coloma de Farners is now more aware than ever of the events of the 17th century when the people refused to provide accommodation for the troops of the Count of Olivares, Minister of Philip IV.

Their refusal led the Royal Bailiff himself, Monrodon, to head to La Selva. The people felt themselves subjugated and humiliated by the soldiers. The division was made up of 16 companies, more than 1,000 mouths to feed in a town which at the time had a population of 900.

Given the situation, the revolt was imminent, and on 30 April 1640, Monrodon was assassinated. In response, Philip IV’s troops burned homes, farmhouses and the church in an attempt to destroy the town, to raze it to the ground, but the people of Santa Coloma stood firm, giving rise to the War of the Harvestmen, the prelude to the War of Succession.