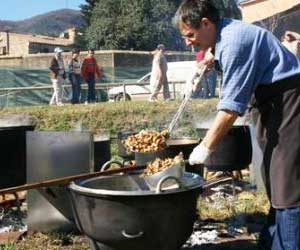 The pig slaughter festival in La Cellera de Ter has over the years become a key exponent of home cooking in the north of the La Selva district. The event began with the aim of reviving the traditional family meal served when they slaughtered their pig once a year. This would guarantee meat and cooking fat for a good long time for those living in the countryside. It served to bring together family and friends, all helping one another out in staging the event.

The slaughter in itself would require professional expertise. The preparation, handling and processing of the meat produce was then a separate stage, requiring those with the skills to ensure that the food would be properly preserved. This meant that everyone would have to be ready to perform their designated jobs from first thing in the morning. The process would end with a festive meal.

As lifestyles changed, with the shift from farming to industry at the start of the 1960s, this family celebration gradually lost hold, and with it some of the traditional dishes which would be served. This festival, then, aims to revive those traditional dishes, such as “fetge amb mantellina”, a traditional dish of liver served in the town on this day, along with peas with bacon which would also be served on the occasion.

For many participants, then, the festival offers a unique opportunity to relive not only the flavours of traditional dishes, but also the atmosphere and the aromas which would accompany the event. For those of a younger age, it is an unrivalled chance to discover the flavours of traditional local cooking. More than a thousand people take part in the communal lunch and craft fair, while the market selling antiques and pork produce is the perfect way to round off a celebration marking the very end of winter, typically held on the second weekend in March.