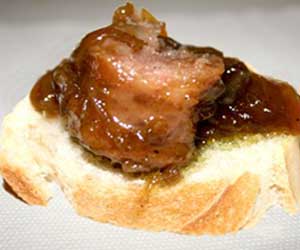 The Sweet Botifarra sausage is unquestionably an established feature of our district.

Although its origins are far from clear, it is believed that it may have arrived from overseas via the Costa Brava, to remain within the region bordered by the Pyrenees, the Guilleries and the River Tordera.

The sweet botifarra is a most unusual sausage in which the meat seasons the sugar almost more than the other way around, with 750 grams of sugar used for every kilo of meat, making it the ideal sausage for those with a really sweet tooth.

The village of Salitja in Vilobí d’Onyar on the boundary between the Gironès and La Selva districts had the fine idea of dedicating a whole day to the sweet botifarra with the involvement of local restaurants, which serve up a themed menu.

Carnival Sunday is the sausage’s big day, with plenty of events staged to showcase the Botifarra i Na Dolça. Tastings are also held by the participating restaurants and cooks of Salitja.